As I understand the SOFA (status of forces agreement), the urgency now underway is to come to a mutual agreeable agreement before Dec 31, 2008 as that is when the ?? ‘legality’ ?? of U.S. troops in accordance with UN mandate ends.   The Iraqi government has not reached agreement with President Bush, and speculation is that Iraqis know there will be a new Administration after U.S. November elections and would rather wait and deal with the new Administration which will take office Jan 2009.

Look, I get it that all sides have been subject to violence resulting in maiming and death on a massive scale and being concerned about this element in the duration of the now 6 year war in Iraq is but one of a continuum of ongoing concerns.   But this is an Administration who has clearly demonstrated a total disregard for the status of deployed U.S. troops and the preciousness of life on all sides.  I have no reason to have trust or confidence that this President will preside with enough prescience to adequately deal with this development, any more than he has demonstrated prescience to deal with the ongoing developments of the last eight years of his administration.  He is more than likely willing to play out the time he has left in office and leave it to the next administration to resolve.

I do take some reassurance that the Pentagon, Generals, and chain of command understand the stakes and will advocate on behalf of the troops, and this development cannot wait until January; it needs attention and resolution now!   With my son-in-law deployed in Iraq now in his second ‘stop-loss’, extended 15 month deployment, it is discomforting enough, but to think he may be at risk now as well to Iraqi sense of justice is frightening.  With the complete injustice of this war and the Iraqi people having reason beyond reasonable reaction to hate America and American troops, I shudder to think……

Video below explains much better than my grasping at words.  Please watch the video.   Read more at the news source, The Real News Network  here. 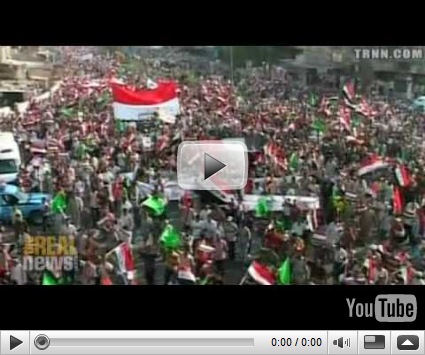 Leitta, I hope they figure something out soon. Am getting more and more worried by the day about my son-in-law and his brother who are in Iraq. We can only put our hope in the Generals and other higher ups who know and understand what is at stake.

We Are a Blue Star Family

One of the features of military families in this war that differs from previous wars is that there are more young married soldiers.

Here are some statistics:

-- One million military children are under 11 years old.

Lietta began this blog in 2004, themed to chronicle the events as relates to deployed military troops in Iraq, fully believing her own activisism as a military family speaking out would bring the Iraq war to a close and bring the troops home quickly. Five years after the initial invasion, the U.S. occupation of Iraq (Iraq war) rages on ....

Lietta is also a contributing editor at Washblog, a political blog forum relevant to politics in Washington state, where she focuses on issues related to politics governing Iraq war.

Focus of this Newshour piece was the new phenomenom of military families speaking out publicly.

MICHAEL BESCHLOSS - "We're seeing something that really is unusual because military families in history have been pretty much inclined not to do this sort of thing.

It's in a way sort of part of that culture.

Below is a list of Lietta's other thirty plus military family speaking out media covered interviews that came after the Newshour piece.

Lietta's account of our meeting with U.S. Senator Maria Cantwell challenging her continued position of support for Iraq war

What began in March 2004 on a small, local scale with sermons I prepared and delivered in my local church, speaking out about the war in Iraq, was altered when I agreed to do an interview with Newshour with Jim Lehrer, which aired nationally October 2004.

Chronicling below a list of media interviews I've done since then as a military family speaking out. Listing chronologically with most recent interviews at top.

In an unprecedented two-day Citizens' Hearing held over January 20-21, more than 600 citizens joined a distinguished tribunal panel in listening to testimony about the legality of the US invasion of Iraq.

The Citizens' Hearing was convened to present evidence that Lt. Ehren Watada would have presented in his February 5, 2007 court martial on the question that the military ruled barred from entry - the question of the Iraq War's legality.

Lt. Watada has repeatedly asserted that because the Iraq War is illegal, it is his duty to refuse orders to deploy.

He twice attempted to resign his commission and the Army refused his resignation citing 'stop loss'.

He stated he was willing to deploy to Afghanistan, but not Iraq as he discerned that would be illegal order on the premise that Iraq invasion/occupation is illegal.

He is the Army's first commissioned officer to take such a stand.

click on link below
Daniel Ellsberg giving testimony at Citizens' Hearing on Legality of U.S. Actions in Iraq, Tacoma,WA, Jan 20-21, 2007.

Lietta introduces the Panelists who will hear two days of testimony at Citizens' Hearing on Legality of U.S. Actions in Iraq, Tacoma, WA, Jan 20-21-2007

Who is following this blog

In accordance with Title 17 U.S.C. Section 107, this material is distributed without profit to those who have expressed a prior interest in receiving the included information for research and educational purposes.

PTSD "Winning the War Within"

PTSD Combat : Winning the War Within
Recommending! A blog dedicated strictly to providing helpful, use-able information and Resources to our military families and returning troops. click link below